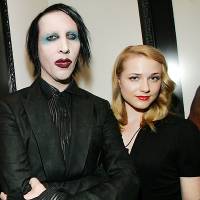 Evan Rachel Wood is finally talking about her controversial relationship with Marilyn Manson.

The 'Westworld' actress began dating Manson, who was nearly two decades her senior and still married to Dita Von Teese, when she was just 18.

The pair were together for four years. They would became engaged but the romance fizzled a year later.

"I met somebody that promised freedom and expression and no judgments," Wood tells Rolling Stone.

"I was craving danger and excitement. I looked at my mother one day and said, 'Mom, I'm gonna get on this tour bus for eight months and see the world and have a crazy journey and find myself, and if people aren't OK with that, I'm sorry, but I can't live my life for other people.'"

"Most teenagers are searching for identity, and I was thrown into a situation where I was supposed to have that already figured out. Then you're demonized for figuring it out and getting messy. People would call me a whore when I walked down the street, and you can't not be hurt by that."

Wood and Manson split in 2011 but she has no regrets about her relationship with the rock star.

"I wouldn't trade any of it. I appreciate everything he taught me. I just don't think we were right for each other."