Eva Longoria Wants 'To Be The Female George Clooney' 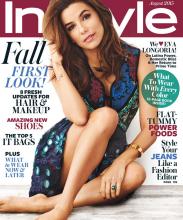 ) says she doesn't want to always be known as one of the stars of 'Desperate Housewives'.

"I want to be the female George Clooney," the 40=year-old Longoria tells InStyle magazine.

"He directs, produces and stars. I want to be in charge of the final product."

The self-confessed "control freak" says: "Everyone goes, 'Oh, she's an actor–turned–director,' and I'm like, 'No, I was always a director and a producer who happened to become an actor.'"

"I love quotas and budgets, and I like barometers of success. I like measurements of success," said Longoria. "Tell me what to do, and I will exceed it."

"We're the fastest-growing demographic in the United States, but I don't want us to just be a large group," she says. "We have to be influential. We have to stand for something."