ESPN To Shut Down 3-D Channel By End Of Year 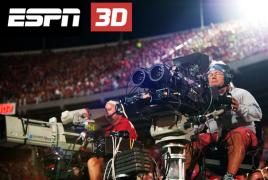 ESPN has announced that ti will shut down its 3-D channel by the end of the year after it failed to take off.

The announcement may be the final nail in the coffin for 3-D broadcasts, which launched with great fanfare but has been limping along for years.

The sports network says there weren't nearly enough viewers to make 3-D broadcasts viable and that number was "extremely limited and not growing."

It was definitely a miscalculation by ESPN, which said shortly after the release of 'Avatar' and the introduction of 3-D TV sets that it expected a "3-D tsunami" in the industry.

Many believe the biggest hurdle to the adoption of 3-D TV has been the clunky glasses with viewers had to wear.

And with events having to be shot in both 3-D and 2-D formats, ESPN didn't want to take their bets on a dying section of the market. Ultra HD, which increases the pixel count of high-definition TVs by four times, is thought to be the next best leap.

"Nobody knows more about sports in 3-D than ESPN, and we will be ready to provide the service to fans if or when 3-D does take off," it says in a statement. "We continue to experiment with things like ultrahigh definition."