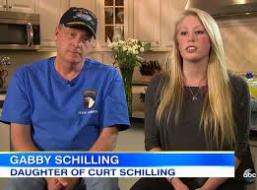 Schilling was fired after he commented on a Facebook post regarding North Carolina's controversial LGBT law that bans transgender people from using bathrooms different from their gender at birth.

The photo showed an overweight man in a wig and women's attire with the words, "Let him in! To the restroom with your daughter or else you're a narrow-minded, judgmental, unloving racist bigot who needs to die."

"A man is a man no matter what they call themselves," Schilling said. "I don't care what they are, who they sleep with, men's room was designed for the penis, women's not so much. Now you need laws telling us differently? Pathetic."

ESPN, which awarded Caitlyn Jenner the Arthur Ashe Courage Award at the ESPYS, fired Schilling after they became aware of the comment.

"Curt Schilling has been advised that his conduct was unacceptable and his employment with ESPN has been terminated," ESPN says in a statement. "ESPN is an inclusive company."

It appears this was the final straw for ESPN. Schilling was suspended for a month last year for a comment on social media which compared extremist Muslims to Nazis.

The 49-year-old Schilling wrote on his website that his critics were "just dying to be offended so you can create some sort of faux cause to rally behind."

"There are things I have deeply held beliefs in, things I have that are core to who I am, things I am passionate about. If you ask me about them it's likely I'll give you a passionate answer," he wrote. "Whether you like that answer or not is completely up to you. I am not going to give you answers to make sure you like what I say, let the rest of the insecure world do that."