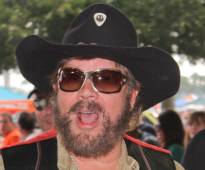 The country singer, appearing on Fox News' 'Fox and Friends', likened a June golf game that President Obama and House Speaker John Boehner played to a game between Hitler and Netanyahu.

"It was one of the biggest political mistakes ever," Williams Jr told Fox News' Steve Doocy, Gretchen Carlson and Brian Kilmeade. "It'd be like Hitler playing golf with (Israeli Prime Minister Benjamin) Netanyahu."

Told by anchor Kilmeade that he didn't understand the analogy, Williams said: "I'm glad you don't, brother, because a lot of people do."

"They're the enemy," Williams continued. "Obama! Biden! The Three Stooges."

When Carlson said they were taken aback because "you used the name of one of the most hated people in all the world to describe, I think, the president," Hank Williams Jr. said: "That's true but I'm telling you like it is."

Later in the day, the singer tried to back off his remarks but the damage was done.

"Some of us have strong opinions and are often misunderstood," he said. "My analogy was extreme -- but it was to make a point. I was simply trying to explain how stupid it seemed to me -- how ludicrous that pairing was. They're polar opposites and it made no sense. They don't see eye-to-eye and never will. I have always respected the office of the President."

Meanwhile, ESPN said they chose to pull the opening because the artist is often associated with the network because of MNF: "While Hank Williams Jr. is not an ESPN employee, we recognize that he is closely linked to our company through the open to Monday Night Football. We are extremely disappointed with his comments, and as a result we have decided to pull the open from tonight's telecast."