Erin Andrews Thanks Supporters In First Appearance Since $55 Million Verdict 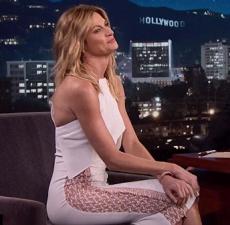 ) made her first public appearance since the $55 million verdict in her court case over a secretly filmed nude video of her.

The Fox Sports and ESPN reporter chatted with Jimmy Kimmel and thanked fans for their support during her court case.

Kimmel began the interview by asking Andrews for "a million dollars" from the $55 million a jury awarded her.

Andrews appeared missed the reference at first, saying "I don't have any money" and instead talking about her contract.

Once Kimmel clarified, she described the interview as her "come out of hiding" after the emotional court case.

"I want to thank everybody. There were so many people that actually reached out and, all over the world really and were so supportive."

"It is nice that with something horrible like that, you get to see the nice part of the Internet," said Kimmel.

"Yeah. Is there a nice part?," Andrews responded obviously over the lack of concern she felt after the leaked video went viral.

Michael David Barrett had filmed the videos in hotels in Nashville and Columbus, Ohio, where he asked staff the rooms Andrews was staying in and fitted the peephole with a camera.