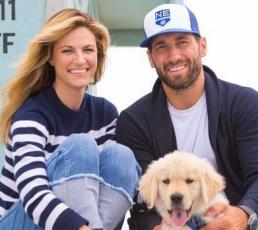 ) married former NHL star Jarret Stoll in Montana while over the weekend.

The 39-year-old 'Dancing with the Stars' co-host announced their engagement last December after more than four years of dating. Stoll popped the question while the couple were visiting Disneyland.

The sportscaster was diagnosed with cervical cancer in September 2016. She credited the period with strengthening her bond with Stoll.

"It was a huge step for my relationship with my boyfriend at the time," she told Health. "Because you don’t know if a guy is going to want to sit in with an oncologist and see, ‘OK, so this is your cervix, and this is your uterus, and we are cutting out this part.'"

"We hadn't even been discussing marriage. We hadn't discussed babies! It really puts things on the fast track for you — because you have an oncologist saying to you, 'We highly recommend that you guys do your embryos right now, freeze them.' I’m like, 'Hi, hon. I love you. I hope we're spending our lives together.' And he was amazing."

It was an intimate ceremony with close friends and family.