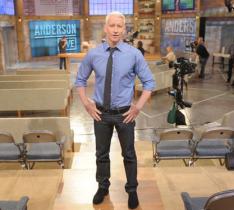 Anderson Cooper will welcome a lineup of friends to co-host his newly revamped edition of 'Anderson', which will go live in season two and change its name to 'Anderson Live'

) co-host with Anderson. The actress and Broadway star recently left CBS drama 'The Good Wife' after an injury suffered on-set.

Other co-hosts will include Erin Andrews (photos

Cooper is enthusiastic over the new setup of the show: "We've got a lot of fun, great things planned for the new season. I am really excited to be joined by daily co-hosts and look forward to switching to a live format, which allows us more freedom to cover topical issues as well as connect more with the viewer at home."

The show's set will also boast a new look.