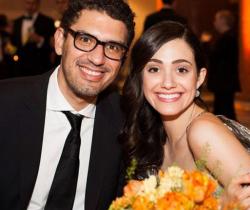 The two have been dating for two years after meeting when he directed her alongside Justin Long in 'Comet'.

The engagement has been confirmed by Rossum's publicist.

When the pair began dating, the 28-year-old actress explained: "I don't gravitate to the jock; it's the nerdy guy in the corner. I'm dating a writer now. Writers are sexy."

She was previously married to music executive Justin Siegel. However, the two split up less than two years after marriage.

"Honestly, I was so young," she told Cosmopolitan about her union. "I don't think I knew what marriage meant. My parents were never married, and I was teased in school and called a bastard."

"So the idea of marriage as safety forever was idealized in my head, and we rushed into it."