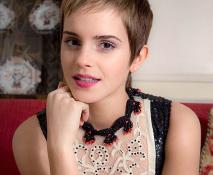 ) have leaked after a stylist's phone was hacked.

The non-nude photos feature Emma trying on various clothes, swimsuits and bikinis for the stylist.

"Photos from a clothes fitting Emma had with a stylist a couple of years ago have been stolen," explains her publicist. "They are not nude photographs."

The 'Beauty and the Beast' star and former 'Harry Potter' actress is an advocate of the HeForShe campaign and a UN Women Goodwill Ambassador.

Fans will remember the previous threat of a leak of Emma Watson nude photos, with a countdown clock, after making of one of her speeches. However, Watson, who is steadfast about protecting her privacy wasn't worried.

"I knew it was a hoax. I knew the pictures didn't exist," Watson said. "The minute I stepped up and talked about women's rights, I was immediately threatened. I mean, in less than 12 hours I was receiving threats."