Emma Stone: I've Been Dealing With Panic Attacks Since Childhood 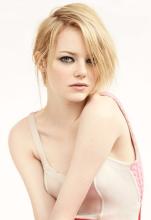 Emma Stone may have played bubbly, outgoing characters but Emma Stone says that she was an outcast as a child because of constant panic attacks.

"I was just kind of immobilized by it," she tells the July issue of 'Vogue'. "I didn't want to go to my friends' houses or hang out with anybody, and nobody really understood."

She started having the attacks and seeing a therapist at age 8 but it wasn't until 11, when Stone joined improv comedy she discovered something that helped.

"It gave me a sense of purpose. I wanted to make people laugh," she explains. "Comedy was my sport. It taught me how to roll with the punches. Failure is the exact same as success when it comes to comedy because it just keeps coming. It never stops."

By age 14, she put together a PowerPoint presentation to convince her parents to let her drop out of high school and start auditioning for roles. They agreed.

Stone, now 23, says she still has the occasional panic attack.

"I think I felt really out of control of my surroundings," she says of filming 'The Amazing Spider-Man'.

"I was just baking all the time. It seemed like it made me feel, if I put these in, I'll know what the outcome is."