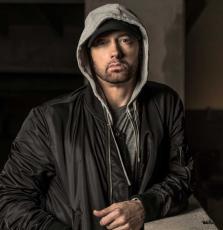 Eminem rips Donald Trump a new one in a rap at the BET Hip Hop Awards that aired Tuesday night.

The rapper described the president as "a kamikaze that'll probably cause a nuclear holocaust" among other choice words that had to be bleeped out for TV audiences.

He draws a line in the sand between his fans and any fan of his who's a supporter of Trump.

Eminem also declares his support for the NFL protests and tells players to raise their hands in a fist if they're not allowed to kneel during the anthem.

"We love our military and we love our country but we f--king hate Trump," he says.