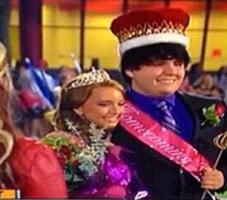 The 17-year-old, who is the artist's only biological child with ex-wife Kimberly Scott, was voted homecoming queen of Chippewa Valley High School.

And, according to local newspaper 'The Macomb Daily', Eminem was on hand to see it happen.

"Hailie came out with her mother Kim when she was introduced with all the other kids but her father watched from inside the school because he didn't want to cause a scene — he wanted Hailie to have her own moment," a parent told the paper.

"I think all of the kids in the district have shown respect to their family and just let her live a normal life here out of the spotlight."

Hailie is seen wearing a crown and holding a bouquet of roses in a photo from a TV report next to the Homecoming King, a self-described nerd who loves 'Star Trek'.