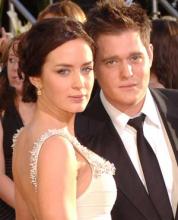 During a chat with Howard Stern on his radio show Wednesday, the radio host asked Emily Blunt about her much talked about relationship with singer Michael Buble.

Stern began by praising Buble and suggested they were "perfect together."

"I don't know if I was perfect with him," Blunt said of their relationship of three years. "But we had a good time."

Stern then asked the actress about Buble's alleged cheating, which reportedly ended their relationship in 2008.

"You're like the great seductor. I can't do it."

Blunt, of course, married John Krasinski in 2010 while Buble has been married to Argentinian model Luisana Lopilato since 2011.