Emily Blunt On Filming 'Into The Woods' While Seven Months Pregnant 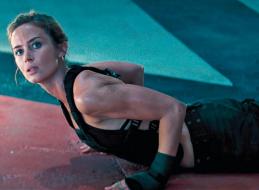 Emily Blunt tells David Letterman about filming 'Into The Woods' while being seven months pregnant.

Emily says she found out about her pregnancy the same week she got the job and, by the end of filming, she was seven and a half months into it.

"It's also because I'm supposed to be playing this barren woman who can't have children," laughed Blunt. "The ultimate irony of a pregnant actress."

"So I was about four months when we started shooting and seven and a half months by the end. And the objects they would hide my pregnancy behind got bigger and bigger."

But even while pregnant Blunt managed to save Meryl Streep from a fall that left everyone else on the set frozen.