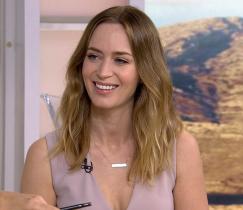 Emily Blunt is apologizing for her comments about the GOP debate after being attacked by several media outlets, including Fox News' 'Fox & Friends'.

"Why don't you leave Hollywood, California, and let some American women take on the roles that you're getting because the Americans are watching your movies and lining your pockets?," said co-host Anna Kooiman after Blunt remarked the debate was scarier than her movie.

"I became an American citizen recently and that night we decided to watch the Republican debate, and I thought this was a terrible mistake. What have I done?," Blunt laughed in an interview.

The actress, who recently became an American citizen, also said becoming a American was "so strange and slightly disarming. I'm not sure I'm entirely thrilled about it."

In a chat on the 'Today' show Thursday morning, Blunt tried to downplay her comments, saying she was only joking.

"It was so not the intention to hurt anybody or cause any offense, so I really apologize to those that I caused offense," said the 'Sicario' actress.

"It was just an offhand joke. I think I'll probably leave the political jokes to late night or something."