Emilia Clarke Fangirls Over Matt LeBlanc, Makes Him Say 'How You Doin' 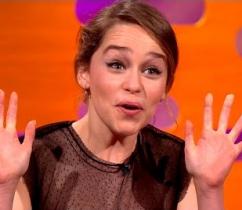 Emilia Clarke fangirled over Matt LeBlanc as they appeared together on 'The Graham Norton Show'.

The 'Game of Thrones' star couldn't help but blush over the 'Friends' alum even though he admitted he hadn't watched the HBO series since the first season.

"I watched it the first season, and then I kind of fell out of it, and then I tried to watch it this season and I don't know what's going on," LeBlanc explained.

"It's OK. You've seen the good bits," Clarke responded and laughed as she realized the double entendre.

As any fan would, she then asked LeBlanc to say his famous 'Friends' catchphrase.

"Would you be able to ask me how I'm doing?" she asked.

LeBlanc obliged and in a later segment joked that he should've seen the recent episode with Emilia Clarke nude (uncensored link) to "really see how you're doing."