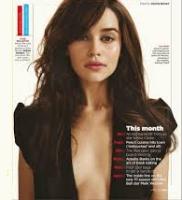 Emilia Clarke is defending nude scenes on 'Game of Thrones'.

The 30-year-old British actress, who plays Daenerys Targaryen, talks about the nudity (uncensored link) in the hit HBO series and especially remembers a season four scene in which she commands lieutenant Daario to get naked.

"'Take off your clothes,'" Clarke remembers her character's line with Elle. "It's brilliant. I actually went up to co-creators David Benioff and Dan Weiss and thanked them. I was like, 'That's a scene I've been waiting for!'"

"I get a lot of crap for having done nude scenes and sex scenes. That, in itself, is so antifeminist," she adamantly says.

"Women hating on other women is just the problem. That's upsetting, so it's kind of wonderful to have a scene where I was like 'There you go!'"

This isn't the first time Clarke has felt she had to defend her nudity on the series.

"It doesn't stop me from being a feminist," she told Rolling Stone last month. "Like, guess what? Yes, I've got mascara on, and I also have a high IQ, so those two things can be one and the same."