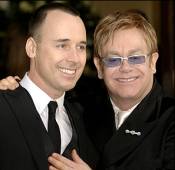 "Madonna. Best song???? F--k off!!!," wrote an irate Furnish on his Facebook page after Madonna's 'Masterpiece' was awarded the statuette.

"Madonna winning Best Original Song truly shows how these awards have nothing to do with merit," he continued. "Her acceptance speech was embarrassing in it's narcissism."

)'s 'Born This Way' sounded 'very familiar' to her own 'Express Yourself?', showed "how desperate she really is."

But the bitterness didn't start after John was snubbed for the award. The singer told NBC's Carson Daly on the red carpet that Madonna "doesn't have a f--king chance of winning tonight."

When Daly told Madonna of the dig, she quipped, "Was he wearing a dress? May the best man win."

"I hope he speaks to me for the next couple of years," she said backstage. "He's been known to get mad at me so I don't know. He's brilliant and I adore him so he'll win another award. I don't feel bad!"