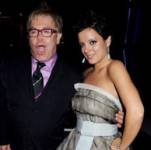 Lily Allen and Elton John co-hosted the GQ Man of the Year Awards Show in the UK last night, but by the end of it, Elton was so annoyed with her antics he called out the singer for drinking too much.

Allen was drinking champagne throughout the awards show, but she gradually began to lose focus and repeatedly swore on camera. At one point, she even blurted out the news of her brother's engagement to his sister, even though the couple hadn't publicly announced it yet.

But as Allen strugged to get her words out to describe a "very special point in the evening", Elton quipped: "What, you are going to have another drink?"

That prompted Allen to respond: "F--k off, Elton. I am forty years younger than you and have my whole life ahead of me." But Elton was quick to hit back and said, "I could still snort you under the table!"

Allen, clearly unprepared for that, simply mustered "F--k off... I don't know what you are talking about."

Check out video of the Elton John and Lily Allen segment below: