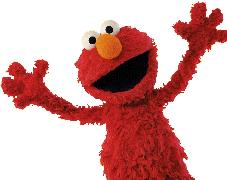 An online video imagines 'Sesame Street's Elmo getting fired due to budget cuts to PBS proposed by President Donald Trump.

The video shows a man delivering the news to Elmo. The character doesn't take the news well and says he's worked at the show for 32 years.

He also wonders what's going to happen to his medical insurance and whether he'll have to take pictures with tourists in New York's Times Square.