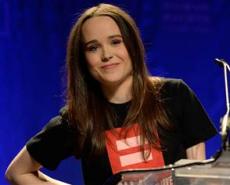 "What about the question about LGBT people being fired for being gay or trans?," Page asked Cruz in a discussion that lasted over five minutes.

"Well, what we're seeing right now, we're seeing Bible-believing Christians being persecuted for living according to their faith," Cruz replied.

"You're discriminating against LGBT people," Page said. "Well, would you use that argument in segregation?"

"Now I'm happy to answer your question, but not to have a back-and-forth debate," said Cruz.

Cruz tried to end the discussion on a point about Obama and ISIS, saying: "Well, good then we're agreed on that. Thank you, ma'am."

But Page sarcastically replied: "Don't do that. Yeah, I appreciate it."

The 28-year-old actress has become an activist for the cause after coming out as gay in an emotional speech at the Human Rights Campaign's Time to Thrive conference last February.