Ellen Doesn't Want Trump On Her Show: 'He's Against Everything I Stand For' 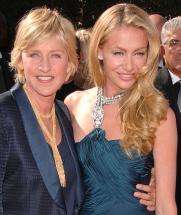 'Today' host Matt Lauer recently visited Ellen DeGeneres and got a chance to put the host on the hot seat of her own show.

The most interesting moment occurred when conversation turned to the topic of President Donald Trump.

"What's your relationship with Donald Trump? Do you know him at all? Have you had a chance to interview him?," Lauer asked DeGeneres.

"I mean, I know him from Celebrity Apprentice because when we first started the show, we filmed something with him," explained Ellen.

"I flew in his helicopter and did a bit with him. So I knew him then. I have not spoken to him since he he's run for president or become president."

Asked if would be interested in having him on the show, Ellen replied: "Um, no."

Why wouldn't she want to have a chance to speak with the now Commander in Chief, she said: "Because I'm not gonna change his mind. He's against everything that I stand for."

"We need to look at someone else who looks different than us and believes in something we don't believe in and still let them have their rights."