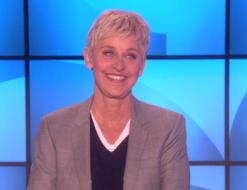 Ellen DeGeneres explained why she canceled Kim Burrell's appearance on the show after the singer's homophobic remarks.

Burrell, who sang a tune in 'Hidden Figures', was supposed to appear with Pharrell Williams on Thursday.

However, the talk show host decided she no longer wanted Burrell on her program after she called gay men and women "perverted" during a sermon and suggested homosexuals would die in 2017 due to their sins.

"I actually didn't know her, her name is Kim Burrell. She made a statement she was doing a Facebook Live and she said some very not nice things about homosexuals so I didn’t feel that was good of me to have her on the show to give her a platform after she was saying things about me," DeGeneres explained.

"I love her, just like I love everybody else and we all got to get used to that," he said. "We all have to get used to everyone's differences and understand that this is a big, gigantic, beautiful, colorful world and it only works with inclusion and empathy. It only works that way."

"I'm telling you, the world is a beautiful place but it does not work without empathy and inclusion. God is love. This Universe is love and that's the only way it will function," he continued. "And I get it, sometimes the divisive stuff works in life. We learned that lesson last year that sometimes divisiveness works."

"But you have to choose what side you're on. I'm choosing empathy. I'm choosing inclusion. I'm choosing love for everybody just trying to lift everyone. Even when I disagree with someone, I'm wishing them the best and hoping for the best because we can't win the other way."

In Burrell's defense, Pharrell only said "she's a fantastic singer."