Ellen DeGeneres Pays Tribute To Late Father: 'Not One Bone of Judgment' 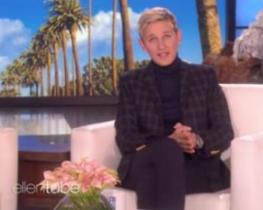 Ellen DeGeneres paid tribute to her late father, Elliot DeGeneres, on Thursday after he passed away earlier this week. He was 92.

"Before we go to break, there's something else I want to talk about. I mentioned yesterday when I was talking about all the mudslides that are going on in my community of Montecito, which is heartbreaking, I said that I had a lot going on in my life," said the 59-year-old host.

"In addition to what’s going on in Montecito, I lost my dad this week. That is my dad, Elliot."

DeGeneres said that her father was "very proud of me. He loved this show and he was a kind man, very accepting man. There was not one bone of judgment in his body."

Describing him as "very funny," she credited him for her sense of humor.

"We only took one family vacation. When I was a little girl, we came to this lot, to the Warner Bros. lot, and took the tour and went around. And now, I work on the Warner Bros. lot and I have my own stage with my name on it. So he was really proud of that," she said.

She then shared an image of a rainbow over the lot.

"I was leaving the building, and I looked back and there was a rainbow over the Warner Bros. studio. This looks photoshopped," she said.

"This is what I saw after I talked to my dad and he died 10 minutes later after that. Pretty amazing. I got a rainbow before he died."

When I was a kid, my dad took us on one vacation to Warner Bros. Studios. He loved this business. He loved that I was in it. When he died, I saw this rainbow over the stage they named for me. pic.twitter.com/QQswe3mwfi