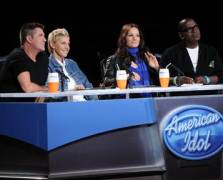 With the transition into 'Hollywood Week', Ellen DeGeneres finally made her debut as the new 'American Idol' judge last night.

But the way she mixed up her honest critiques and well-timed punchlines, you would have thought she was a veteran of the reality series.

In fact, with her attention squarely focused on stage, you could argue that she was more polished than some who've been sitting at the table for much longer.

There were fears from fans that Ellen would be too focused on punchlines to give legitimate reviews, but at least after her first hour on the job, she appears to have hit all the right notes with 'Idol' fans.

The 52-year-old comedian offered up informed and passionate praise for the cream of the crop but she wasn't afraid to hold back the cruelties either.

At one point, Ellen joked something may have been wrong with a beatboxer's microphone. Later, she told one dull singer that the performance "almost put me right out."

She even offered up fashion advice to one barefoot singer: "You should put some shoes on. It's filthy here. Hollywood is a disgusting town."

See a clip from last night's episode below: