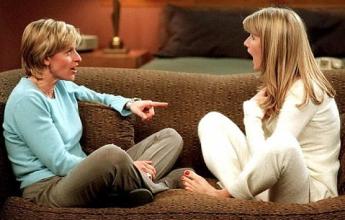 Twenty years after her now iconic coming-out episode Ellen DeGeneres is talking about the decision to risk her career.

"I'm Ellen and I'm gay," she said at the taping of Friday's 'The Ellen DeGeneres Show'. "Twenty years ago I said that — it was a much bigger deal then."

"It was called 'The Puppy Episode' because we wanted to keep it a secret until it aired and because 'Ellen Throws Her Career Away' seemed too on the nose," she quipped.

"Actually, the real reason we called it 'The Puppy Episode' is because when the writers told the executives that they wanted me to come out, because my character needed to be in a relationship after four years of not being in a relationship, someone at the studio said, 'Well, get her a puppy. She's not coming out.'"

"It was the hardest thing that I ever had to do in my life and I would not change one moment of it because it led me to be exactly where I am today standing in front of all of you," she told the audience.

In an interview with the AP, DeGeneres added she decided to do the episode despite threats from executives because it was "more important to me than my career."

"I suddenly said, 'Why am I being, you know, ashamed of who I am just to be successful and famous in society’s eyes?'"

"I knew I was risking hurting my career. But to know that Laura Dern was punished for it just because she played my love interest in that show is crazy. I mean, she's a brilliant actress, she's heterosexual and yet she was punished. And Oprah got hate mail just for being a part of it."

Oprah Winfrey and Laura Dern also stop by to talk about their memories from the episode.