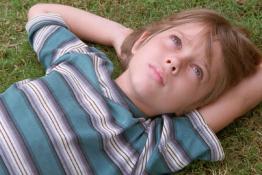 Ellar Coltrane tells Jimmy Fallon that he didn't see any footage from 'Boyhood' until the film was complete twelve years later.

The drama written, co-produced and directed by Richard Linklater, was shot intermittently over a twelve-year period as Coltrane grew from childhood to adulthood.

Filming began in the summer of 2002 and was completed in October 2013.

Coltrane, who watched himself grow up on screen when watching the footage, says Linklater made no attempt to cover up his acne, piercing or influence him about his look.