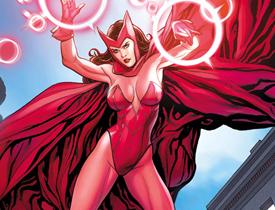 Elizabeth Olsen chats with Seth Meyers about the upcoming 'Captain America: Civil War' and her relief upon being told she wouldn't have to wear Scarlet Witch's revealing costume from the comics.

Olsen says she was told "you will never ever have to wear what she wears in the comics."

"You know, I did ballet growing up but that's not a confident look," explains Olsen as Meyers shows a photo of the busty female hero in skimpy attire.

"I feel like I required a lot of tape just tonight so that would be a whole other world."