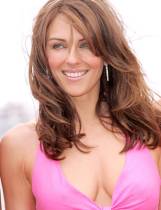 ) will guest star for multiple episodes on the fifth season of The CW's 'Gossip Girl'.

The character is described as a sexy, intelligent and self-made media mogul.

Hurley's Diana will reportedly wreak havoc on the residents of the Upper East Side -- including Gossip Girl herself.