Elizabeth Berkley Channels 'Saved by the Bell's Jessie on 'Dancing' 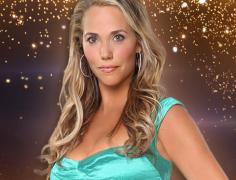 In a bit before her 'Dancing with the Stars' performance on Monday night, Elizabeth Berkley finally channeled the character that made her famous -- 'Saved by the Bell's Jessie Spano.

Recalling her caffeine pill breakdown on the comedy, Elizabeth Berkley didn't want to give up the "jive pills."

"I'm so excited! I'm so... scared. No, I need them. I have to jive!," she said before breaking out into dance with Val Chmerkovskiy's Zack Morris following a school bell.

) and Mark Ballas were sent packing, , despite earning the first 10 of the night.

The live audience booed when Milian's name was announced and Milian said she was "shocked."