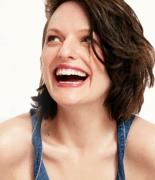 Moss met Armisen when her 'Mad Men' co-star Jon Hamm hosted the NBC comedy program in 2008. They dated for roughly a year before walking down the aisle.

"Looking back, I feel like I was really young, and at the time I didn't think that I was that young," Moss tells New York Magazine.

"It was extremely traumatic and awful and horrible."

"And I got that out of the way. Hopefully. Like, that's probably not going to happen again."

In an interview with Howard Stern last year, Armisen spoke highly of Moss and said he had been probably been a "terrible husband."Elisabeth Moss Calls Brief Marriage To Fred Armisen 'Extremely Traumatic'