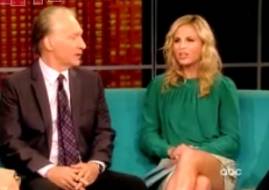 Elisabeth Hasselbeck couldn't wait to rip into Bill Maher in his appearance on 'The View' Tuesday.

In fact, Hasselbeck spent much of Maher's eight minute appearance asking for an apology from the comedian for making a joke about her on his HBO show 'Real Time'.

"Hi ladies, what a great day to be here when a Republican makes a fool of themselves like that," joked Maher as he sat down, referring to Herman Cain's inability to answer a question about Libya in a recent interview.

"Happens everyday though. Sorry," he laughingly said to Hasselbeck. "It's okay," she replied. "You can apologize in a couple of minutes. We'll get there."

"Can I bring something up," began Hasselbeck a minute later. "I hear different things come out of you sometimes. I want to go back to a time that bothered me not for my personal reasons but for women."

"Forgive this idiotic Republican for bringing this to your brilliant mind. In February, Lara Logan was in Egypt and she was brutally attacked by a mob there. Now prior to her coming back, you on your show, said 'Now that Mubarak has released Lara Logan, he must put her intrepid hotness on a plane immediately. In exchange, we will send Elisabeth Hasselbeck.'"

The audience laughed but Hasselbeck wanted answers from Maher.

"Now that's fine if you want to laugh. But I make it my job to sit with the best of comedians in broadcasting. You can't sit here and tell me I'm wrong for saying that wasn't that funny."

Hasselbeck tried to get at whether there was a line and Maher said that's what made his show different.

Hasselbeck wanted to know if Maher was sorry for the remark and would say it again.

"If I had a crystal ball and knew I was coming here and had to spend my whole segment talking about it, no I wouldn't," he said. "It really wouldn't be worth it."

Barbara Walters tried to reel in the conversation and asked her co-host if they could move on but it didn't end there. After Maher took another jab at Republicans, Hasselbeck said: "You're so brilliant, wow, I actually feel smarter sitting next to you."

"Really? I feel like I'm in high school next to you," Maher retorted. "How long ago was that?," Hasselbeck asked.

As the interview wrapped up and Sherri Shepherd thanked Maher for coming with "we always love it when you're here," he quipped, "Well, some of you do."

Check out the heated and uncomfortable Bill Maher interview in its entirety below: