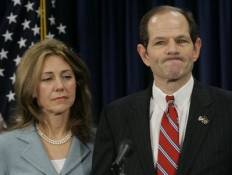 The much-anticipated documentary about former New York governor Eliot Spitzer premiered at the Tribeca Film Festival over the weekend.

In the as yet untitled film, Alex Gibney examines the rise and fall of Spitzer through a series of interviews with family, friends, escorts and foes.

Gibney, who won an Oscar for 'Taxi to the Dark Side' in 2007, interviewed Spitzer four times over the two years he spent making the film.

However, Ashley Dupre, the call girl involved in the scandal, was not interviewed for the film after she asked for editorial control.

Spitzer looked directly into the camera as he tried to explain away his dalliances with prostitutes.

"You cave to temptations in ways that seem easier and perhaps less damaging," he later admitted.

Suwal said that Spitzer spoke in a whisper when he made his first order for three hookers that he almost didn't fulfill it. He thought it was a prank.

Silda, Spitzer's wife, also refused to be interviewed for the documentary. However, the film did direct us to a rather intriguing quote of hers.

"On some level, this is my fault," she first told a former close friend of the governor who shared his own account of her husband's fall. "The wife is supposed to take care of the sex. This is my failing."

But she "ultimately, she came to recognize that it wasn’t a reflection of her, but of him — his needs, his frustrations, his psychological wiring."

The documentary tracks Spitzer's rise in New York politics and his crusades against Merrill Lynch, AIG and the New York Stock Exchange before he resigned in 2008.