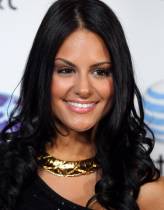 Sometimes there's nothing like a hot date to get your mind off being eliminated. Just ask Pia Toscano.

Toscano and Ballas were spotted on a date Friday night at Los Angles seafood restaurant Gulfstream. A day after the season ten front-runner's surprising elimination from 'American Idol'.

And it was the 22-year-old singer who initiated the date after spotting Ballas at CBS Television City, where both their shows shoot.

Toscano went through 'Dancing with the Stars' contestant Chris Jericho, a friend of the dance pro. Ballas, who has his own album coming out tomorrow, was more than happy to take up the offer.

Meanwhile, 'Idol' executive producer Nigel Lythgoe says while Pia Toscano's elimination may have been shocking to judges and some viewers, she was never really a favorite in his books.

"I know the voting results, so I know she was never a front-runner," says Nigel. "The fact of the matter is, it appears that Pia didn't connect with the audience the way we maybe think she did."

It's rumored that Toscano is close to a record deal with Interscope Records.