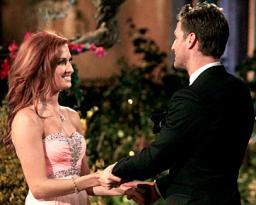 'Bachelor' Contestant Kylie Lewis, who not only embarrassed herself on this week's episode of the ABC reality series but was eventually eliminated, says producers wanted her humiliated from the start.

Kylie's cringe-worthy moment came during the rose ceremony when she walked up to accept a rose, unaware that Juan Pablo Galavis had taken someone else's name.

Lewis tells Chicago's 96.3 FM that producers did everything from suggest her limo entrance to her hair color and clothing. They even told her to get in touch with Pablo after their meeting, which she thinks made her look desperate to him.

"My limo entrance was suggested to me by producers," she says. "And I agreed to it -- it's not that they force you to do anything. It's just that they come up with the ideas, and then you go with it."

But what she's most upset about is that producers deliberately included her mis-step in the episode after advising her to dye her hair from strawberry blonde to red and outfitting her in a pink dress.

"That rose ceremony probably took an hour to film," explains the 23-year-old. "So you're standing there -- and it's 6 AM -- after filming for 10-plus hours with no sleep. That's the part no one really realizes. So you're already delirious."

"I felt like I was going to throw up and then I cried a little," she says of having to relive the moment. "Then I raised my glass to a new year!"