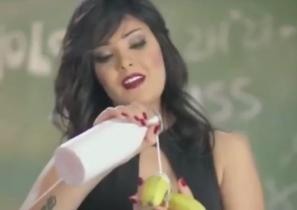 Egyptian singer Shaimaa Ahmed, a 25-year-old known professionally as Shyma, has been arrested after her music video sparked outrage in the country.

She has been reportedly jailed for two years upon being found guilty of inciting debauchery and publishing an indecent film over the video in which she appeared in her underwear while suggestively eating a banana.

In the video, she appears in a classroom setting licking an apple and very suggestively eating a banana, dripping with milk, in front of a chalkboard scrawled with "Class #69."

Shyma had apologised before her arrest to anyone who thought the video was "inappropriate."

"I didn't imagine all this would happen and that I would be subjected to such a strong attack from everyone," she said.

In addition to the jail sentence, Shyma has also been fined $500.