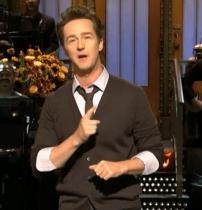 Edward Norton tells Jimmy Fallon the story of how he rescued good friend Leonardo DiCaprio, who he calls Unlucky Leo, from drowning in the ocean.

Norton said DiCaprio's fascination with technology got him into a sticky situation that could have badly for the Oscar winner.

"Leo, I love him, but he's very addicted to devices and things like that, right? And I know this about him," he began.

Yes, before his story, you just heard Norton expertly throw shade at DiCaprio for only dating supermodels.