Eddie Murphy: 'I Don't Feel The Pressure' On Hosting Oscars 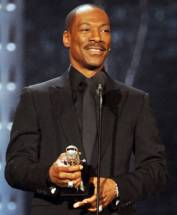 Eddie Murphy says he's not worried about hosting the Oscars.

But he does promise to stay there all night and not storm out like he did in 2007 after losing Best Supporting Actor for his role in 'Dreamgirls'.

"I'm looking forward to doing it and I promise I'll stay there all night," Murphy said at a press conference for 'Tower Heist'.

"Oscars is a fun thing to do. I don't feel the pressure."

"I get to introduce people and stand up straight. Maybe I'll even be in a couple of silly sketches."

"I'm going to wear a powdered sky-blue tuxedo, and at the end of the evening, I'm going to urinate on myself in front of a billion people," he joked. "Just letting you know, the worst host ever."

Murphy said he will start working on Oscar material once the nominations are out.

"I'm looking forward it because I've only been to the Oscars two or three times in 30 years."