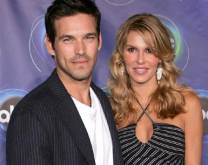 Days after LeAnn Rimes and Eddie Cibrian openly flirted with each other for the first time at Valencia Country Club and then at a Kings of Leon concert, Cibrian's estranged wife Brandi Glanville says she just doesn't understand what happened.

"He's just somebody I don't know. I don't understand," she says. "You think you know one thing and you wake up and it's all been a lie."

"Eddie is a compulsive liar, cheater and a home wrecker," she tells 'Us Weekly'. And he has been an absentee father."

"Eddie's displays of poor taste have hurt our two children. He may just end up drowning himself in that 'unfair fishbowl,", she says making reference to Cibrian's recent comment that he was being "placed in an unfair fishbowl."

Back in March, after allegations of an affair with Rimes initially surfaced, Brandi stood by her husband of eight years. But the two eventually separated at the end of July, after the affair continued, and she's definitely singing a different tune now.

As for how she explains the situation to their two children, aged six and two: "They know that daddy is at work all the time. That's what I tell them. So when he does come home it is surprising for them and they are very happy."

Brandi adds that she's spoken with Rimes and told her, "'He's all yours.' I'm just like, 'You know what? You're not the man I married.'"