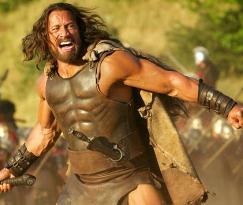 Dwayne 'The Rock' Johnson tells Conan O'Brien that he got so worked up playing mythical Greek hero Hercules that he lost consciousness.

"The 'I am Hercules' -- when Hercules finally accepts his fate is when he gets all of his powers as a Demigod," explained Johnson.

"So it's an iconic moment in the mythology and the movie. I wanted to put everything I had in it so I had the prop department make sure the chains were real and the steel was real and I couldn't break it."

"And then I just with everything I could possibly do I just let it all out: 'I am Hercules.'"

"What happens is if you're in an athletic event or anything like that, you have all this adrenaline you can let it go if you're fighting, playing football or whatever."

"But in this case I had nowhere for it to go. So I was like 'I am Hercules'... and then I black out. Blacked out. I was already chained so I didn't fall on my face."

Johnson, Conan and Andy Richter shared so many laughs over the story that the actor even wanted to skip the promotional clip.