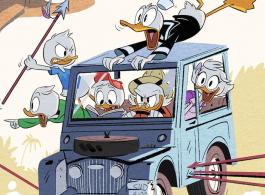 Disney XD has released its first look at the 'DuckTales' reboot premiering this summer.

The voice of nephews will take some getting used to but Tennant really pulls it off as McDuck.

Disney XD hasn't announced an exact premiere date yet but the animated adventure has already been renewed for second season.