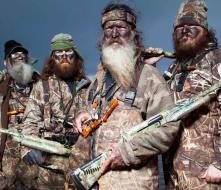 The stars of 'Duck Dynasty' have teamed up with gunmaker Mossberg to launch their own line of guns.

Duck Commander says the multi-year agreement "will include focus on the family's passion of waterfowl hunting, promotion of the shooting sports and family values as well as a series of Mossberg ‘Duck Commander' firearms."

The line will feature nine shotguns, two semiautomatic rifles and a semiautomatic pistol all embolden with a camouflage design and the Duck Commander logo.

In a promotional video titled 'Happiness' for Mossberg, patriarch Phil Robertson asks "do you know what makes me happy ladies and gentlemen?"

"To blow a mallard drake's head smooth off."