Kiefer Sutherland's night began rather innocently with a couple of drinks but by 4 AM, the '24' star was on the London streets drunk and shirtless.

After bouncers put him in a headlock, they escorted the actor out of the strip club when he took off his shirt and became unruly.

Peter Stringfellow, the owner of the club, explains: "Around about 3:15 a.m. Kiefer Sutherland decided it would be very funny to take his shirt off."

"When it was explained to him very gently that it was the job of the girls and not the customers, he burst out laughing. His friend thought that this would be a good time for them go home."

Sutherland was taken out the back door to avoid paparazzi, but a couple of photos still managed to hit the British tabloids after he stumbled and fell all over the streets.

"One of the photos in the paper looks like my security guys got Kiefer in a headlock. That is not the case," says Stringfellow. "They were just helping him into his car. Kiefer had slipped and the doorman tried to catch him and at the same time keep the photographers from taking photos."

Kiefer Sutherland's drinking troubles have been well documented over the years. He pleaded no contest to drunk-driving in 2007 and served 48 days in jail during the Hollywood writers' strike. 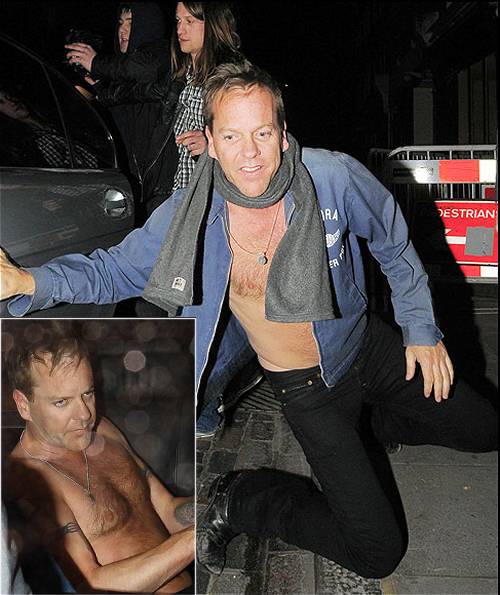