Drew Brees Talks About Killing An Alligator With Bear Grylls 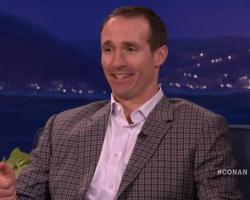 Drew Brees, quarterback for NFL's New Orleans Saints, tells Conan O'Brien what it was like to kill an alligator with Bear Grylls.

"Yeah. I went on the show, 'Running wild with Bear Grylls'. We went down to Panama and we went out in the jungle and survived for two days and at one point we're walking through this dry creek bed and he had been talking about, 'Hey, we need to find dinner, it's getting late, find a camp site, make fire, eat.'"

"So we come around the corner and there's a six-foot alligator and he said that's dinner and I said how do we do this and he said, I'll distract it, you jump on it, stab it, kill it, gut it, carry it, we eat it."

"Everything you saw was exactly what happened. He distracted it with a -- formed a noose out of this cord he had and hooked its upper jaw so it couldn't wheel around and bite my face off when I jumped on it and pushed its snout down, stabbed it, flipped it over, gutted it, carries it a mile to the campsite."

"We made a fire, cut steaks out of its tail, put on a stick, like roasting a marshmallow."

"This is another way you and I are different," says Conan. "There are a couple. I would no more ever do that in a million years."