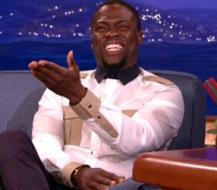 "He sucks," says Green. "You know, the thing that makes Kevin a great comedian is that he believes the stuff he says. Once again, thinking he's good at basketball, he believes it."

At All-Star Weekend, Hart actually toppled Green in a 3-point contest but the NBA player says the actor-comedian isn't any good.

"I mean, he hit a couple spots where he shot well during the three-point contest, and I was shocked. But no!"