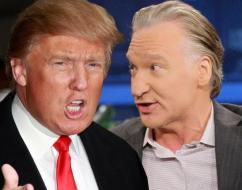 Donald Trump is suing Bill Maher after the comedian, referencing Trump's repeated demands from President Obama, quipped that he would donate $5 million to charity if Trump produced a certificate proving that he was not the "spawn of his mother having sex with an orangutan."

Maher made the joke in an appearance on the 'Tonight Show' with Jay Leno but Trump says what he heard was an agreement and the 'Real Time' host needs to pay up.

At a suggestion on Monday's Fox & Friends that Maher could argue he was joking about the offer, Trump said: "I don't think he was joking."

"But he said I will give and I said I will accept. I felt I had an obligation to sue on behalf of the charities."

With news of the lawsuit, Maher simply responded on Twitter with "What?? Really? Hahahahaha."