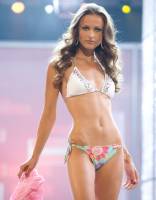 Donald Trump is pleased with news that the 2013 Miss World pageant has banned bikinis from the competition because it's being held in Indonesia.

"Well, I own Miss Universe, so I'm actually very happy about it," Trump said in a segment on 'Fox and Friends'.

"Because if they doesn't have bikinis their ratings go right down the tubes," he said bluntly.

The pageant ruled last week that contestants will be required to wear conservative beach sarongs instead of skimpy bikinis amid mounting protests from hard-line Muslim groups in the country.

"What about a best burqa as a compromise?," asked one of the show's host.

The Miss World pageant will be held on September 28 on the island of Bali.