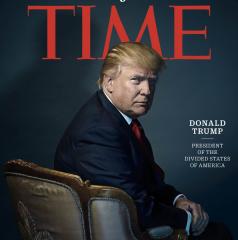 Time magazine has named President elect Donald Trump its Person of the Year.

"When have we ever seen a single individual who has so defied expectations, broken the rules, violated norms, beaten not one but two political parties on the way to winning an election that he entered with 100-to-1 odds against him?," Gibbs explained.

The Person of the Year issue's cover reads, "Donald Trump: President of the Divided States of America."

"It's a great honor. It means a lot," Trump told NBC's 'Today' show on Wednesday morning.

When asked about the headline on the cover, the incoming President said: "I didn't divide them. We're going to put it back together and we're going to have a country that's very well-healed."

Interestingly, Gibbs revealed that their third finalist were Hackers after they threw a wrench into the election with the hacking of the DNC.