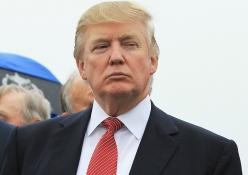 'Meet the Press' host Chuck Todd wasn't going to let Donald Trump off easy during an interview on Sunday morning.

Todd asked Trump why he wasn't living up to the same standards he expects from the press when it comes to accusations levelled against him.

"You demand pin-point accuracy on reports about you and your net worth. Why shouldn't you have the same pin-point accuracy on the claims you make? Is it hypocritical of you calling us out if we're not calling you out when you stray from the truth?," he said, referring to Trump's claims that he saw American Muslims celebrating as the World Trade Center fell.

"I saw it on television. I saw clips. And so did many other people. And many people saw it in person," Trump insisted. "I've had hundreds of phone calls to the Trump Organization saying, 'We saw it.' It was dancing in the streets. I saw it at the time. I stick by it. Hundreds of people have confirmed it."

Trump said there Muslims celebrated the fall of the Twin Towers "all around the world. That has been reported very strongly."

"Why wouldn't it have taken place in New Jersey? I've had hundreds of people call in and tweet in on Twitter, saying they saw it and I was 100% right."

"But they want to agree with you," Todd replied. "That doesn't make it true. You're running for president of the United States. Your words matter. Truthfulness matters. Fact-based stuff matters."

"Take it easy, Chuck," Trump said. "This is people in this country that love our country that saw this, by the hundreds they're calling, and they're tweeting. And there's a lot of people. In Sarasota, people were telling me yesterday they used to live in New Jersey. They remember it vividly. They thought it was disgusting."

"So, these are people that saw it, too. The Washington Post reported it. Many, many people have seen it. I have a very good memory, I'll tell you. I saw it somewhere on television many years ago. And I never forgot it. And it was on television, too."

As for Syrian refugees, Trump warned "has the potential to be one big fat Trojan horse." He said the real plan was to allow 200,000 Syrian refugees into the country, while the Administration has maintained the number is 10,000.

"I think what he really has in mind is 200,000 people and maybe even more than that coming into our country. And we can't have it. We don't know who these people are. They're undocumented totally."